The impact and consequence of using advanced computing artificial intelligence to generate mathematical, algorithmic signals to be used in capital market trading.

With today’s super-fast computer systems delivering enormous data processing capacities, the compilation, sorting and archiving of staggering volumes of information became an easy task. This information is then utilized to create systems and develop models used in almost every aspect of our lives. From Medicine to geophysical climatic prediction to economic models, it appears to be almost no limit to what our advanced computing abilities can achieve. It seems obvious, then, that one would wonder: can this technology predict the capital market build models and suggest effective investment options? The answer is a resounding "YES!", However, it should be noted that this is a controversial issue. One of the major bones of contention regarding the use of this technology is its effect on the global financial structure. This is not Uber competing with Taxi Cab or Airbnb challenging hotels, the impact of this technology will be felt from the single person checkbook to the balance sheet of the largest bank in the world.

IBM Watson’s artificial medical intelligence system, for example, can predict the prognoses and progression of certain medical conditions using all medical data available to humankind in a split-second and then suggest the best treatment plan based on the experience of all doctors in this field worldwide. No human doctor can achieve this kind of feat on his own. The sheer amount of data in question makes that idea an impossibility. Similar systems are used in almost every industrial field affecting our lives. Smart homeis here,the home has sensors and compiles the data that them know what you need and when. Don't you believe it? Alexa®, Siri® and Cortana® remember where you went, answer even the most random of questions while simultaneously learning about you and anticipating your interests, likes, and needs. While not deployed to trading on a large scale, financial data compiling systems are building trading models that could significantly tip the scale. This could be described as the genie coming out of the lamp.

Imagine showing up at the start line of a major marathon – the Boston Marathon, for this story’s sake. You’ve practiced hard and kept your body and mind in the fittest state possible for that 26-mile sprint. About 30,000 runners are there as well. Of those, it is estimated that 10,000 participants are serious runners. Statistics say that as many as 14,000 will reach the finish line, with the top Olympic level athletes making it in as little as 3 hours and the walkers finishing in 8 hours. Those are all normal numbers that will not raise any eyebrows. 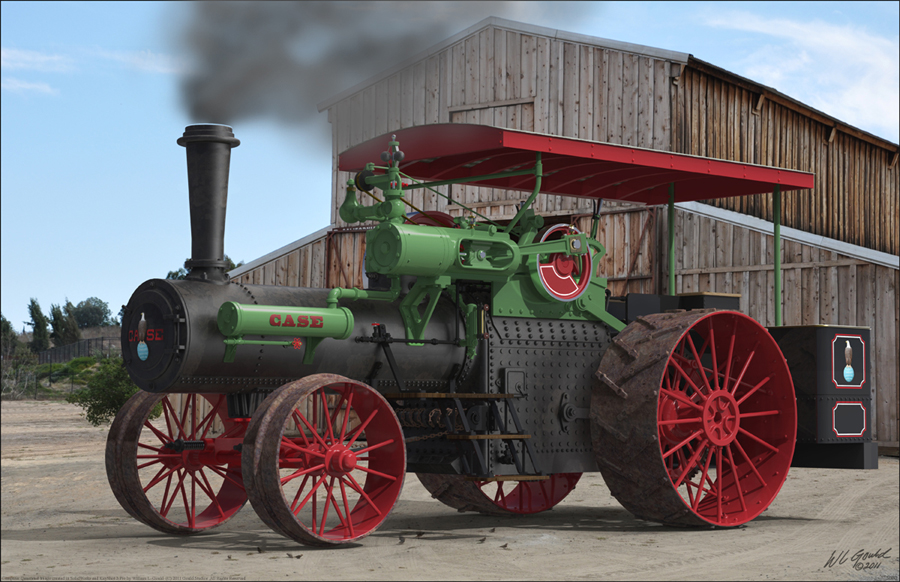 1912 CASE steam powered tractor
Let’s say, however, that something strange happens this particular morning. A few robotic men show up to run the marathon, too. Their top running speed is 130 MPH, and their brain computes infinite calculations as they run. Anything from air resistance to road tilt can be quickly determined and analyzed to enhance their running ability, so their already-fast speed of 130 MPH is even further optimized for effort and performance. This means they will hit the finish line in 12 minutes, while almost all other runners can look back and still see the start line. The use of artificial intelligence-generated algorithms in capital market trading is the equivalent of those high-speed robots racing with people on foot. While most are amazed atthe exceptionally high-performance A.I. algorithms can produce; most professional money managers consider its ability to anticipate and avoid loses to be the most amazing value. Most of us can pick the fast runner, the trick is when to cash your profit and exist the position with your gain before it turns around? The turn-around usually happens very fast most will miss it. This is not since fiction; it’s the reality that we live today. Perhaps we are as fascinated as a 1912 farmer watching CASE® tractor plowing 100 acres in the time his 6 man team plow 5.

Live financial market data in today’s global economy is used to develop mathematical formulas to select specific stock or other security, based on various financial calculations such as PE (price to earnings ratio), EPS (earning per share) as well as 20 to 30 other common calculations in conjunction with endless combinations of trend lines such as MACD (mathematical average conversion and diversion curve) , the ATR (average true range) or ATV (average trailing volume). This information is then used to decide what to buy or sell as well as when to do so. A system like this is called an algorithmic trading system, or perhaps a quantitative trading system (Quant). Many are already widely available for use and can be used on inverse side of the market as well to select and calculate what to short and when to cover the short. Options Trading also benefits from these systems when determining the put or call prices strike points.

In Algorithmic Trading, the investment manager, a human, remains in control. The manager instructs the software on what to look for, which filters to use and the values of those filters to select. The manager also decides the algorithmic value to be used to execute a buy or a sell; then the machine performs as instructed. The computer searches, filters, calculates and sells or buys securities as instructed. The computer does not decide, the human does. It’s like when we drive a car- it doesn’t drive itself, it just goes faster than we can run. But the technology is now passing through the evolutionary stage where machines are retaining information and building their own skills and complex intelligence. Computers are learning to recognize information and independently make their decisions without human involvement. And this is a totally different ball game. 1912 CASE steam powered tractor

Advanced software today, on its own, can back-test millions of algorithms and see what results have been achieved and which algorithm had the best performance. It can even go further by modifying this best algorithm to make it perform even better in backtesting. Furthermore, computers can recognize market conditions and even political circumstances that might have affected the performance in the backtest. They can detect patterns that humans would most likely miss or misinterpret. Some of this software even retains a social data bank obtained from social media, news and expert rating platforms that may have affected a certain stock in the past. artificial intelligence is not emotional; it doesn’t get tired or upset nor that it had biases or hidden agenda. AI think clearly all the time, always honest and persistently accurate. AI can provide an immediate correct answer, not a fairy tale story of what the stocks will do on the evening news that has the track records of being wrong far more frequent than right.

Ultimately, the question is: might there be a day coming soon where we all use artificial intelligence to give us the high edge over others? No one can precisely answer this question because there are many other factors beyond the technology itself that come into play. For example, If everyone has access to this same technology, then no one will have the advantage over another. If this is to happen on wide scale, will it make investment services of banks and securities dealers an obsolete products? No one can predict the domino cascade effect this may cause in the global financial markets.

Today, a selected few hold this amazing tool, giving them a huge advantage over the rest. It’s like entering the Marathon riding a motorcycle. Maybe just for now.

Disclaimer: This article cover an editorial matter and is not an advertising for any product or services.